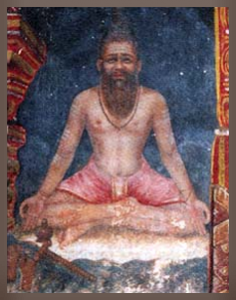 It is believed, that when Parasurama threw his axe in an arc across the seas and created Kerala, he also cleaved the great Western Ghats with the same axe, sweeping them from left to right into two ranges – ‘Thenmala’ and ‘Vademala’. Geographically known as the Palakkad Gap, this place, in myths and legends, has been referred to as ‘Vidharanabhoomi’ (the land that was split asunder).

Long, long ago, attracted by the serenity and breath-taking beauty of the hills and forests of these high ranges, Sage Kashyapa chose to meditate here, at the hill of Govindamala. Kashyapa was an ardent devotee of Vishnu, and as a result of his penance, the Lord is said to have appeared before him. Kashyapa’s desire was that Narayana would remain with him always, in the calm and idyllic surroundings of this land  – and legend has it that the Lord chose to do so. The idol of Mahavishnu, as it appears within the temple, is said to have been consecrated by Sage Kashyapa himself.

Through association with Kashyapa, did this temple come to be known as ‘Kachamkurissi’, as derived from ‘Kashyapan-Kurissi’ – ‘the Hill of Kashyapa’. To this day, the faithful revere the Sage’s invisible presence by praying at the ‘Elanji Thara’, prior to entering the temple.

Up the steep and precipitous hillock of Govindamala, where Kashyapa sat in penance, the faint imprint of footprints, indented with a Sanku (Holy Conch) is believed to be the site where the Sage was granted his Vision. Nearby, a mountain spring magically bubbles up with force and vigour when the flocks of devotees performing the ardous annual pilgrimage every January stand before it and fervently shout ‘Govinda!’

Click below to play  the song of the Kashyapa (Elanji) Thara