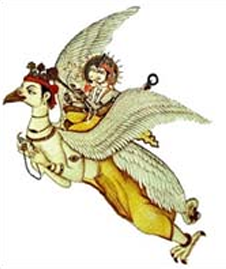 ‘Soma’ is an essential ingredient in the ‘Soma Yaaga’, the ancient Vedic sacrifice for universal prosperity and well being. Volumes have been researched about the precision, poetry and intent of this sacrifice, as also about this mystic plant and its origins.

The existence of the ‘soma plant’ and its variants has defined the patterns of Aryan migration to the South of India. ‘Soma Yaagis’, or ‘Soma worshippers’, chose to settle in those places where variations or ‘surrogates’ of this plant grew and thrived.

William Logan, in his 19th Century chronicle ‘Malabar,’ refers to the ancient chieftainship of Vengunad having been the site of early Nambudiri settlements. These arya-brahman settlers must then, have surely come in search of the ‘somalata’ – the moonplant creeper that grew in the Anamalai range of the Western Ghats, the foothills of which the temple is located!

‘Soma Yaaga’ remains an essential part of Nambudiri spiritual practice, and is thought to be preserved in its purest and most orthodox form among them, and has been the subject of extensive research, by both eastern and western scholars.

Thiru-Kachamkurissi’s association with the ‘Soma Yaaga’ goes back to that age in history, when the Rajas of Vengunad, based at Kollengode, by custom, had the sole pan-kerala ‘right’ to symbolically grant permission for the ‘yaaga’ to commence, by gifting the mystic ‘somalata’ (the moon-plant) to the ‘yaagis’.

This ritual of ‘gifting somalata’ as a signal for the commencement of the ‘yaaga’ has been conducted over the centuries, from within the temple of Thiru-Kachamkurissi, and continues to take place whenever a ‘soma yaaga’ is conducted.

Thus, over the ages, Thiru-Kachamkurissi Maha Vishnu Temple has played a crucial, pivotal and axial role in an ancient ritual that remains essential to Vedic spiritual practices in Kerala – a ritual so powerful and selfless, that the combined chanting of the Vedic metres has actually brought forth the rain.